Serbia has two national Internet domains of equal status: .RS and .СРБ. The first is a ccTLD, the second, the Cyrillic domain, an IDN ccTLD. 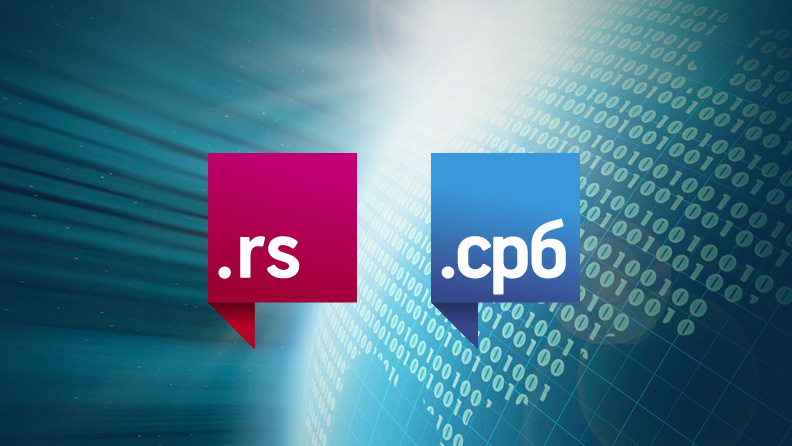 The national Internet domain denotes geographical affiliation and therefore is of exceptional importance in defining the Internet identity of all those who live and/or work in Serbia.

A country code top-level domain (ccTLD) relates to the international two-letter country code, in our case the .RS domain, which succeeded the former .YU domain. The .RS domain became accessible on the Internet on 25thSeptember 2007. Registrations of .RS domains began on 10th March 2008, and as of As of December 10th 2018 the registration of .RS domain names with extended Latin character set was enabled for the following languages: Serbian, Albanian, Bosnian, Croatian, Czech, German, Hungarian, Montenegrin, Polish, Romanian, Slovak, Slovene and Vlach. Therefore .RS domain joined the great global family of IDN (Internationalized Domain Names), which signifies domains that can contain letters in their name that are not limited to the English alphabet.

The Cyrillic domain .СРБ is part of the Internationalized Domain Name (IDN) family, but it belongs to the group of domains whose names support the local language on the right side of the dot. After the Russian .РФ domain, our .СРБ domain was the second Cyrillic Internet domain in the world to be opened for registrations. The .СРБ domain became accessible on the Internet on 3rd May 2011. As of 27th January 2012, .RS domain registrants had six months’ priority registration rights for .СРБ domains, at a special price, and on 1st August 2012, the .СРБ domain was opened up for unrestricted registrations. As of March 5th 2019 registration of domain names with .СРБ domain is enabled for the broader set of Cyrillic characters, which incorporates letters from Bulgarian, Macedonian, Russian, Ruthenian, Ukrainian and Vlach languages.

Site owners decide for themselves whether they want to have an Internet address on one national domain or the other, or on both.

ICANN has delegated the administration of both domains to RNIDS, with the support of Serbian state authorities and the country's Internet community. The end user (registrant) domain registration business is conducted via accredited registrars, while RNIDS, as the national registry, is tasked with managing the Central Registry, that is the central database of Internet domain names registered within the national domain spaces.