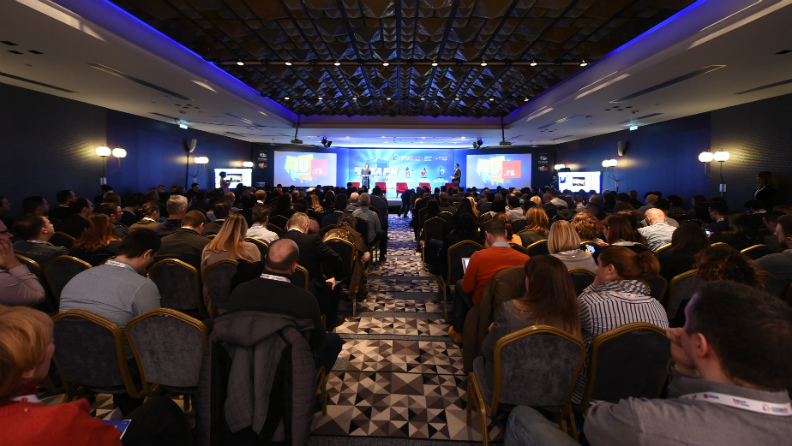 The ninth annual conference on the Internet in Serbia – DIDS 2018 – held under the slogan “Guardians of Internet Identity”, was held 6th and 7th March in Belgrade, organised by the Serbian National Internet Domain Registry Foundation (RNIDS). Some 450 visitors and more than 2000 viewers watching the online stream listened to talks and panel debates with 16 foreign and local experts on current topics from the digital world, such as personal data protection in the light of the GDPR, the role of digitalisation in the preservation of heritage and the importance of an online presence for business.

We also celebrated the 10th birthday of the .RS domain, which, in the words of Tatjana Matić, state secretary in the Ministry of Trade, Tourism and Telecommunications, has established Serbia’s brand on the global network: “Both RNIDS and the Republic of Serbia were timely in realising the importance of having a national domain and of the expansion of the use of the Internet. 10 years ago only 33% of citizens had Internet access. Today, that number has grown to 68% of households and almost 100% of companies.”

However, the growth of technology has also placed new challenges before us. Vojislav Rodić, chair of the RNIDS Board of Governors, highlighted one – personal data protection – in his introductory talk, saying: “Once upon a time we talked about the digital trail we leave on the Internet. But now our entire identity is exposed online”. 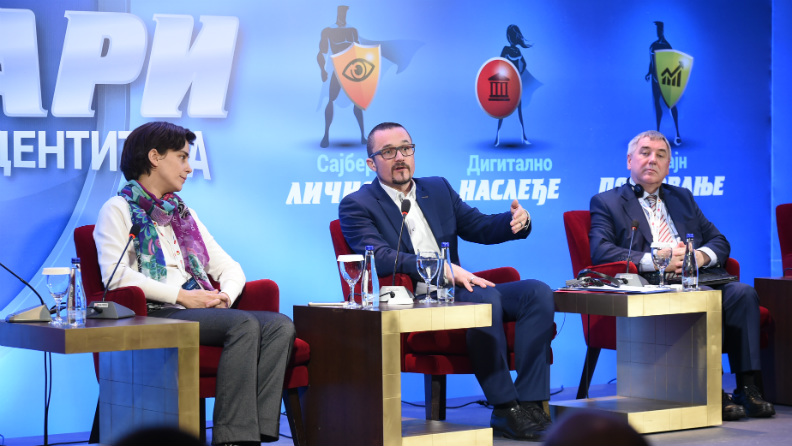 “When they passed down the tradition of Argus Panoptes, the all-seeing giant of a thousand eyes, the ancient Greeks could not have imagined that his creators would turn out to be not gods but humans.” These were the words of moderator Vladimir Radunović, opening the first themed block called “Cyber Personality” – on personal data protection on the Internet. There are a great many actors collecting people’s data, from companies, to institutions to various sensors and cameras in public places, to smart phones, too. This data is processed, cross-referenced and packaged up and then, in some cases, sold or manipulated in other ways. Two years ago the European Union passed the General Data Protection Regulation – the GDPR – which comes into force at the end of May 2018. It lays down detailed rules on working with the personal data of citizens: how and why it is collected, how it is to be stored and how it is to be protected from third parties.

Although it relates to companies from the EU, the impact of the GDPR also extends to those working with them, as well as companies offering services or goods in these territories, which includes Serbian programmers, companies and outsourcing agencies. Those in breach of the Directive can face large monetary fines – up to 20 million Euros or 5% of the company’s annual global revenue, warned Thomas Rickert, leader of the Names & Numbers Forum at eco, the German Association of the Internet Industry. In future, anybody wishing to partner with European companies will have to explain to their clients why they are collecting the data, and to only collect data necessary for a particular business purpose, and to undertake to protect this data.

The Directive has primarily been designed to protect the public. However, objections were also expressed at the conference at the imposition of such rules on sovereign states that are not EU members. Cormac Callanan, PhD, CEO of Aconite Internet Solutions, Ireland, responded to this by saying that previously it was companies like Facebook and Google who imposed their own rules on (dis)respect for user privacy. But now the situation was reversed, he said: Europe was imposing its own rules, not to the benefit of corporations but of citizens. Rickert believes that this could become a global practice, pointing out that the EU could not compel only its own companies to respect these rules since it would lose competitiveness in the market. Hence global companies operating in the European market will also have to adhere to the GDPR, and because the whole world is connected the impact of the Directive will soon be global.

Nevena Ružić, assistant to the general secretary of the Commissioner for Information of Public Importance and Personal Data Protection, noted that protection of privacy also meant protection of dignity, and expressed the hope that Serbia would take on board these rules of behaviour in their essence and not merely accept them as part of the obligation to harmonise its laws with the regulations of the EU. 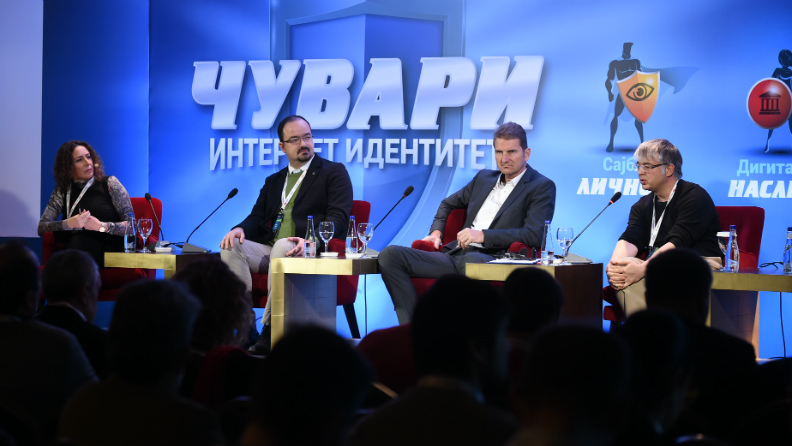 Personal data of course needs to be protected, but on the other hand data of great social significance such as cultural or scientific content needs to be made available to the broadest possible audience – that was the conclusion of the second themed block, “Digital Heritage”, moderated by Tamara Vučenović, PhD, editor of the Radio Belgrade 2 Educational programme.

Introductory speaker, Matjaž Filo, manager of the IT sector at the University of Ljubljana Faculty of Social Sciences, talked about the Slovene experience in digitising cultural, scientific and historical material. “Slovenia has invested in the construction of a State Cloud which has made it possible for all institutions and state administration bodies to be networked and to quickly and simply exchange information,” Filo said, adding that the Slovenes had also worked on the digitisation of content that could not always be stored in the cloud. As he explained, digitisation did not just mean scanning paper documents but also preserving audio and video content to a sufficiently high quality, as well as the metadata and descriptions relating to it.

Adam Sofronijević, PhD, deputy director of the Svetozar Marković University Library in Belgrade, said that this effort was worthwhile, since to give people access to digital sources was to give them knowledge, and the power to create and grow. This was the motivation behind this library’s move to make 600,000 digitised pages of old newspapers accessible to the public.

The Internet has also made it easier for scientists to connect and to exchange experiences. “Digitalisation helps small countries develop science without the need for expensive, bulky equipment, and that is significant for Serbia,” said Nikola Božić, programme director of the Petnica Science Centre, adding that this was an ideal example of how technology could be used to democratise science. 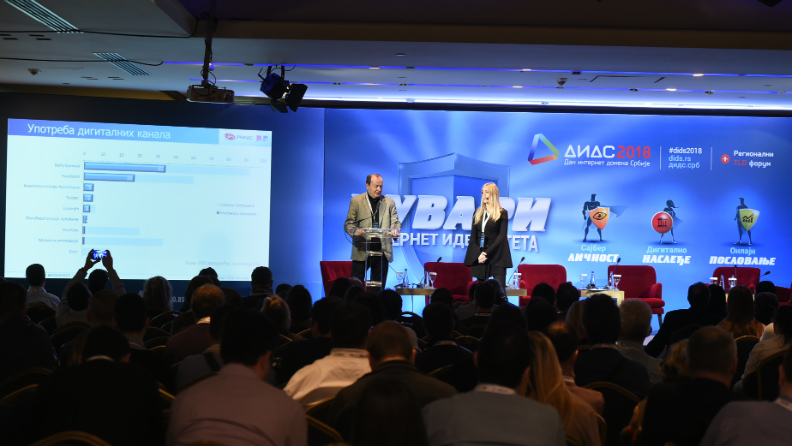 The effect of a company’s presence online on its business performance can actually be measured, which is just what the Gfk research company and analytics company Mineco Computers did on behalf of RNIDS, in a study conducted in December 2017.

The results of the “2017 Digital Vitality Index of small, micro- and medium enterprises in Serbia” study were presented by Milovan Matijević and Branka Matijević in the third themed block, “Online Business”. In Serbia the internet presence index for micro-, small and medium enterprises is very low – 11 out of a total of 100 points. The most common communication channels for these companies are websites, which 45% of companies surveyed had, and Facebook pages (28%), while less than 5% of companies had Twitter or LinkedIn accounts, used online business analytics, had online ordering facilities, or had a YouTube account, a mobile application or a blog. It was interesting to note that older companies, established in the 1990s, were more likely to have websites than younger companies – an unexpected result if we assume that the latter are run by members of more recent generations. Of the companies surveyed who had their own website, 79% had an .RS domain – not a surprise given that 72% of consumers place great trust in it. 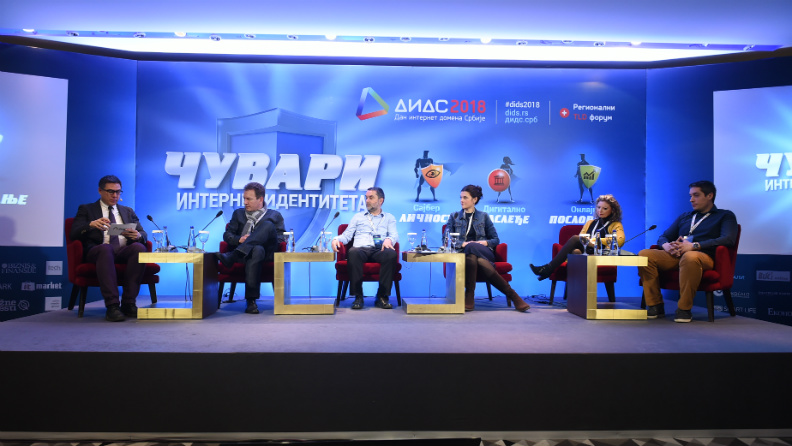 During the panel debate, led by Radomir Lale Marković, these results were also commented on by .RS domain owners from the world of business. Dragan Sandić, owner of Iskon Mode, was surprised by the fact that such a small percentage of companies used the Internet to do business, especially where owners of young companies were concerned, who might be expected to be “digital natives”. The trend was explained by Vladimir Elesin, owner of Tegla’s, who said that today’s young people have been orientated towards the social networks from an early age and found it more natural to use these. However he pointed out that this was not good practice and that a website allowed for better positioning and attracting a larger number of potential clients.

Tanja Živanov from the travel agency Viva Travel said that no-one in her company had the slightest expectation any more that customers were going to walk into their branches having seen a package deal advertised in the newspapers, and added: “The tourism sector has migrated to the Internet, today we literally depend on it. Apart from a large number of travellers, we are also contacted by potential business partners that way, and we have expanded our services, offering additional products to visitors to our site, such as plane ticket reservations, car hire at specific destinations and hotel bookings.”

An Internet presence is important for the toy industry too, confirmed Biljana Branković from the company archi PLAY, which manufactures educational architectural toys. If it were not for the Internet she would not have even got involved in this business, in which the product and its purpose need to be presented to the customer in detail. Dragan R. Sajić from the company Garden, which grows and cultivates plants and landscapes gardens, had a similar impression. Sajić claimed that trade fairs were a thing of the past because all his customers now came to him online, even those from abroad.