There was great interest both in the talks and in the audience discussions at the third annual Intellectual Property and the Internet conference, held 1st June at the Belgrade Faculty of Law. The topic of the conference was the responsibility of hosting providers for trademark infringements, evidence in the procedure for settlement of disputes arising out of registration of domain names, trademark infringements on social networks, cross-border portability, online broadcasting and rebroadcasting of radio and TV programmes and the implications of distance learning in terms for copyright law.

The conference was organised by the Belgrade Faculty of Law and the Serbian National Internet Domain Name Registry Foundation (RNIDS) and supported by the Internet Corporation for Assigned Names and Numbers (ICANN). Introductory greetings were given on behalf of these institutions by Sima Avramović, Faculty Dean, and Danko Jevtović, CEO of RNIDS. 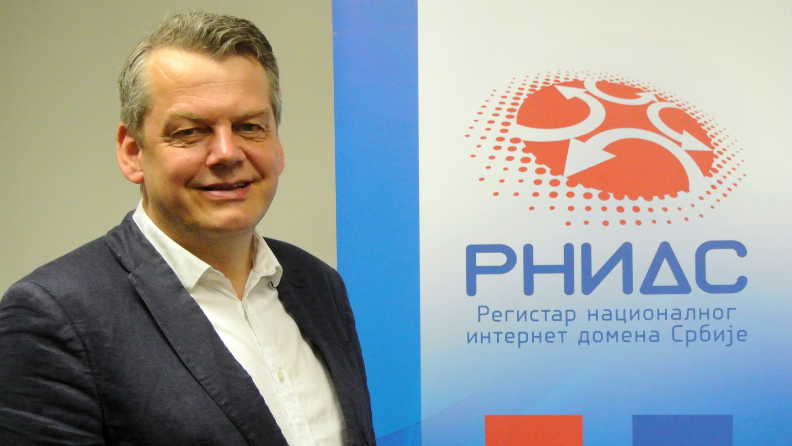 In an introductory talk by Roy Arends, principal research scientist at the Internet Corporation for Assigned Names and Numbers (ICANN), the audience had a chance to hear some lesser-known facts about how the Internet came about, and about the need that arose for regulation through the allocation of domains. He recounted how the first ARPANET connection was established in 1969 between the computers of four American universities. The first message to be sent over this network was “Lo”, since the connection failed while one of the project participants was trying to type the word “Login”. Realising the potential of the network for academic collaboration and exchange of data, research centres began to join the network in large numbers. However, users needed some specialised knowledge in order to use this forerunner of the Internet.

Since there was no graphical interface, content was mostly textual and there was also the problem of limited access to the network, which was only possible from computer centres with the technical capability. It was almost impossible to go to another town in America and get access to ARPANET in order to connect with others. However, this process was later simplified and the number of computer networks grew, too, finally to be connected into a single network. The creation of the Internet Protocol (IP) facilitated data transfer among all network users, and the introduction of search engines and domains made finding content easier. The system of Internet domain name allows Internet addresses to be associated with particular locations on the Internet – servers, sites, email inboxes etc., and today these can have both global and national extensions, .RS and .СРБ being Serbia’s.

Prof. Dr Mario Reljanović, associate professor of the Union University Faculty of Law, presented the key points of a paper titled “Responsibility of hosting providers for trademark infringement – legal framework and practice in Serbia,” explaining that in e-commerce, trademarks are treated under the provisions of the current Law on Trade. This means that consumers must not be mislead – however this limitation only partly relates to data storage service providers. Hosting providers are not held liable if their clients use the trademarks of third parties, or trademarks similar to those of third parties, in bad faith, in the event that the provider is unaware of this. However if they have been informed of such abuse they have an obligation to delete the disputed data. In other words, providers are allowed a form of passivity as long as they are unaware that someone is infringing a trademark – however if they learn of such practices they have a duty to inform the authorities.

The topic of “Rules on evidence in the procedure for settlement of disputes arising out of registration of domain names” was tackled by Dr Marko Jovanović, assistant professor of the Belgrade University Faculty of Law and vice-chair of the Serbian Domain Name Dispute Resolution Committee. He explained that in such disputes the plaintiff needed to prove that they were the owner of the name under which the disputed domain had been registered, the nature of its similarity or identity with their own brand and that the other party had benefited from this activity or acted in bad faith. In these cases, the usual evidence considered is documents and reports from relevant authorities or other subjects, although there has also been a case of the other party to the proceedings being heard in person.

Novak Vujičić, Master of Laws, and attorney at the firm Samardžić in Cooperation with Specht&Partner Rechtsanwalt, spoke on “Trademark infringement on social networks”. Problematic uses of trademarks are not unknown in our corner of the Internet. People register the name of a well-known company or product with the intention of preventing its proper use, or in order to sell a profile under that name, usually for large sums. In such cases, the grounds for the case need to be established, i.e. whether there is merely a similarity between the trademarks or whether the use constitutes a deliberate misappropriation of a third party’s trademark. There are also parody profiles on social networks which resemble those of existing legal subjects. This problem can be addressed by adhering to the terms of use of the specific network, i.e. by including disclaimers that the content is intended for humorous purposes. A recent dilemma has also been that of the use of hashtags, which most legal experts see as a way of categorising Internet content and do not regard it as a trademark.

Copyright and the Internet

The second part of the conference, titled “Copyright and the Internet” was chaired by Prof. Dr Marija Karanikić Mirić, associate professor of the Belgrade University Faculty of Law, and opened by Prof. Dr Slobodan M. Marković from the same institution, who talked about “Online broadcasting and rebroadcasting of radio and TV programmes in the European Union”. He talked about the shortcomings of the common market in regard to the regulation of the distribution of local content. The broadcast of audio-visual material is supposed to be governed by a pan-European licence, however in practice there are limitations imposed by contracts with the main broadcasters of this content. In some areas the legislative framework is lacking in effectiveness, for example in the varying legal terminology in different EU member states, the need of the common market for local radio and TV programmes and the question of who should be investing in advertising a product in another country in order that its producer can benefit financially. This is why licences are still used for these purposes, and Prof. Marković stressed that mandatory pan-European licensing could have a negative impact on the media and entertainment industries.

Prof. Dr Dušan V. Popović, associate professor of the Belgrade University Faculty of Law, talked on the subject of “Copyright law and distance education: on the adequacy of certain copyright exceptions and limitations”. He explained that online teaching activities are governed by the Berne Convention for the Protection of Literary and Artistic Works, which dates back to 1886 and was last amended in 1971, long before the proliferation of the Internet. This convention imposes numerous limitation on online education, and these limitations differ from state to state. In some they only concern the duplication of content, in others they also relate to citation of other works or the use of certain copyright materials. Serbia is conservative in this respect, and Prof. Popović noted that legislation needed to also take the interests of the users of educational content into account, since the dissemination of knowledge was a key factor for the development of poor countries.

In the last presentation – “Copyright aspects of cross-border portability” –  Dr Sanja Radovanović, assistant professor of the Novi Sad University Faculty of Law, talked about the discord between the principles of the common market in the EU and the principle of territoriality. Freedom of movement makes it possible for citizens of the Union to reside for business or private purposes in other member states, but a dilemma arises when considering which laws they are subject to in regard to the use of online content. One solution for this problem might be a directive that would be applicable in all member states and would define place of residence and bring copyright in line with the rights and obligations of users.

Listen to Roy Arends lecture in the following video: