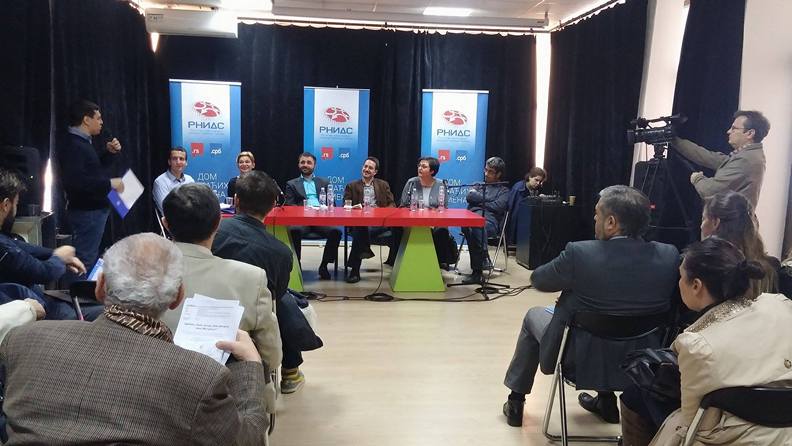 When it was first created, the Internet was used by a limited circle of people in the academic community. By the end of this year, however, according to UN figures, 43.3% of the world population will be online – around 3.2 billion people. With the growth in users, trust in the Internet has suffered, and with the rise of large companies trading in the personal data of their users, and abusing their trust in other ways, the need has arisen for more robust regulation.

When the Internet Corporation for Assigned Names and Numbers (ICANN) was founded 15 years ago, national governments took a close interest in Internet governance. In the meantime, companies, associations and organisations have also become involved in this area, as well as civil society. The Internet, in a way, began to regulate itself, said Vladimir Radunović, director of the cyber-security and e-diplomacy programme at the DiploFoundation, at a public debate today called  “More players, more interests, more Internet!”, organised by the Serbian National Internet Domain Name Registry Foundation (RNIDS).

“There are numerous stakeholders involved in governing the Internet today: the private companies that build the networks and develop the software, the national governments that pass the laws regulating the Internet and the billions of users who contribute to its development, without whom the Internet would not exist. Currently a global debate is ongoing about how to reconcile the interests of all parties and still leave the Internet in the form we know it now, where it would not fragment or fall under the tighter control of national governments. But the question is, is this increased influence of governments even a real danger in the current social climate, considering that today it is more difficult than before to enter into major international agreements behind closed doors. The best evidence of this is the failure of the ACTA agreement, or what is currently going on with the TPP,” said Slobodan Marković, ICT policy and internet community relations advisor in RNIDS. His opinion was that all interested parties needed to be listened to, and their opinions taken into account.

RNIDS is proof-positive that the multi-stakeholder model can work in practice. RNIDS grew out of the need of the Serbian Internet community to resolve a single problem – domain registrations – and it has been successfully doing this for nine years now. Some 80 different organisations comprise the Conference of Co-founders, which is managed in a way that is similar to the idea of direct democracy cultivated by other Internet organisations, where most initiatives and decisions taken come from “below”, said  Dušan Stojičević, Chair of the RNIDS Board of Governors.

However, for such a multi-stakeholder approach to work, involved stakeholders are needed. The government’s Office for Cooperation with Civil Society is trying to bolster this type of participation on the part of citizens and to encourage public institutions to become more open towards the public.

“Local institutions seem to fear the public. According to our most recent analysis of 32 institutions, only 11 held public debates before making important enactments. On average, public debates are held before the approval of every tenth official document or law, which is a very small number,” said Jelena Pajović van Reenen, Head of the group for international cooperation and European integration in the government’s Office for Cooperation with Civil Society. She added that the public needed to be encouraged to take part in decision-making on issues which affected them, and that one possible way of participating in public life was via the Internet: “If you have an argument against a law which is currently in the process of introduction, at least post it on the Internet. At least put it somewhere in black-and-white.”

Her colleague, Stefan Otašević – advisor for planning and creating an enabling environment for the development of civil society in the Office for Cooperation with Civil Society – agrees with the notion that citizens need to become involved both in the process of adopting new legislation and in the oversight of state bodies. He noted that a useful framework for this could be the Open Government Partnership, an international initiative of which Serbia was a part. The initiative means the involvement of the government in areas such as public transparency, cooperation with civil society organisations, anti-corruption efforts and the use of new technologies.

The public debate was organised as part of the Week of Parliamentarism, organised by the Republic of Serbia National Assembly, together with the Open Parliament initiative, and so another topic under discussion was the role of the public in political life.

Gordana Čomić, Deputy Speaker of the Serbian National Assembly, warned the audience that “the public has had access to only 35 of the total of 350 bills brought before the Assembly,” which meant that the public and the business sector were largely unaware of what awaited them tomorrow or in the next five years. “This is why the Assembly and the politicians need to work in a more transparent way.”

Gordana Čomić felt that Assembly members had daily access to information at its source and they should be sharing it with the public, not doing their best to hide it. Ms Čomić said she personally did so via Twitter, where she did not always meet with appreciation, but this was another hallmark of the Internet – everyone had the right to express their opinion.

As compared to the traditional media, the Internet is still something of a bastion of freedom, but the Share Foundation has noted a deterioration in freedoms of expression here too. Between September 2014 and September 2015, more than 20 online media in Serbia were the victims of DDoS attacks which temporarily brought them down, while just in the period up till the end of summer this year around 30 people were taken into custody and questioned, or legal action was brought against them for opinions expressed by them in the social media and on blogs; a number of episodes of unauthorised access to journalists’ data or those of members of the public have also been recorded.

Serbia still does not have adequate legislation in place to improve cyber-security. A new Law on Information Security is scheduled to be brought before the Assembly by the end of the year. This law will among other things require the formation of a special body: the National Centre for the Prevention of Security Risks in ICT Systems (a CERT), which would coordinate the operations of police and other authorities involved in this issue, said Milan Sekuloski from the Geneva Centre for the Democratic Control of Armed Forces (DCAF). In addition to providing protection from security risks, the job of the CERT would be to conduct analyses of risks and incidents, raise awareness among the population, the business sector and public departments regarding the importance of ICT security, provide education in the implementation of rules and regulations and provide advice based on available information. “The CERT will be a kind of cyber-fire brigade, which other than putting out fires will be tasked with investigating the conditions in which fire breaks out,” said Sekuloski, noting that involving private infrastructure owners and other stakeholders in the process was of key importance.