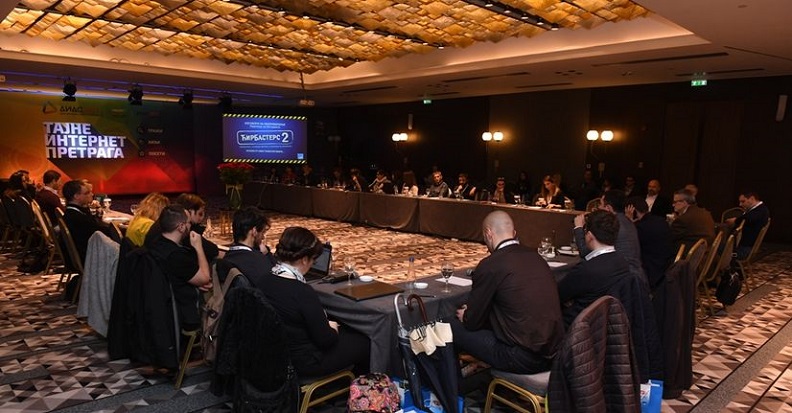 The second day of the DIDS 2017 conference, on 8th March, hosted the Regional Internet Forum, RIF 2017, which for the third year running brought together representatives of national Internet registries from the countries of south-eastern Europe, as well as professionals from state institutions, local Internet communities and global Internet organisations. This year RIF gathered together some 100 participants, who discussed a variety of topics and exchanged their experiences regarding the creation and marketing of online content, as well as adapting the activities of national registries to the changing regulatory and security environment.

In the first block of RIF 2017, creative strategist Lazar Džamić gave a talk on content marketing, and the challenges faced by national Internet domain registries in presenting to users exactly what it is they do, in an interesting and authentic way.  “The trick is to tell a ‘boring’ story in an interesting way. The power of drama should not be underestimated, and the story of Internet domains actually has great dramatic potential – there is opportunity there, a chance to achieve the goals we have set ourselves, and to provide benefit to others,” said Džamić, explaining that it was of vital importance that a message intended for users not only communicate the benefits of the service on offer but also carry a certain emotional weight.

Working on a common task

However, for that message to be properly formulated we first need to determine what the most important roles are that national Internet domain registries play for society as a whole, especially in the light of constant regulatory, technological and security-related change. In a panel debate moderated by Slobodan Marković, RNIDS Adviser for ICT Policy and Internet Community Relations, representatives of national Internet domain registries from all over the south-east European region shared experiences regarding their relationships and partnership with state institutions and other interested parties within local Internet communities.

“Most ccTLD registries began in the form of autonomous entities, but along the way have had to adapt their structure and their goals in line with regulatory demands. Although there is no Internet domain law in Serbia, RNIDS’ activities are governed by other laws such as the Law on Foundations, as well as through its own memorandum of association, which was modelled on those of similar institutions in Europe,” Marković said. He added that RNIDS was in daily contact with members of the Serbian Internet community, in order to be able to take an active part – in liaison with legislators – in creating a modern and well-regulated Internet environment in the country.

Barbara Povše Golob, head of the Slovene .si registry within ARNES, agrees that registries share a common role in taking part in the legislative process. “In order to achieve this, registries must first be reliable, useful and secure,” she said.

Delegates from the Romanian Internet community reported that a public debate was currently under way regarding key questions that will determine the role the Romanian national Internet registry is to play in the future. Some of those questions include who the national registry can be, whether its budget should be transparent and should Internet domains be confiscated sometimes – and how this should be done.

Our colleagues from Croatia said that in order to improve communication with end users they had launched websites and online forums where all interested parties could share their ideas and suggestions for better administration of the Internet in that country. This strategy, which involves including the public at large and not just Internet professionals, has resulted in a much greater influx of feedback.

Vladimir Radunović, director of educational programmes in the areas of Internet governance, cyber-security and e-diplomacy at Diplo Foundation, moderated the next panel debate, which was devoted to reviewing current trends in Internet security and the challenges facing ccTLD registries, as well as best practices in this area.

Oli Schacher, from the Swiss SWITCH-CERT, talked about DNS infrastructure security and the latest improvements in protection, and then Žarko Kecić, Chief Technical Officer at RNIDS, presented successful practices of the Serbian national Internet domain registry thus far. “In the ten years since its establishment, RNIDS’ servers have worked every day with no interruptions or major issues, despite facing DDOS and DNS attacks during that time,” Kecić said. He said that in such situations a timely reaction was the most important thing, together with the use of the latest forms of protection available.

In addition to this, all participants in the dialogue concluded that in order to act effectively in future situations of this kind, mutual cooperation between all regional ccTLD registries would be of great benefit, as well as continued education of end users regarding online threats.

The last section of the programme, led by Barbara Povše Golob, was about just that: joint action, and also the impact of new EU regulations and ICANN rules on ccTLD registries. Gorazd Božič, her colleague from ARNES and director of SI-CERT, said that all EU member states would soon be faced with a new package of regulatory measures (the NIS Directive and the GDPR), which would require them to make appropriate adaptations to their Internet management policies. “Some countries are preparing more rapidly and effectively for these new measures than others, and the collective experiences from their positive practice will soon be shared with all EU member states, which should contribute to a more rapid and coordinated implementation of the new directive,” said Božić.

The last part of this year’s RIF was give over to constructive dialogue and exchange of experiences between all participants in resolving the legal and management issues that faced national Internet domain registries. A video report from the RIF 2017 meeting will be made available at rif.rs.